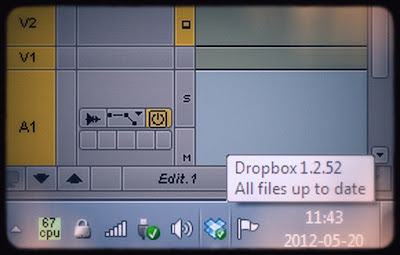 I’ve been in the game since the early nineties when editing meant copying analog video signals from one Betacam VTR to another. The thought of being able to have your own editing suite at home or in a small freelance office was then unthinkable. The cost of three Beta-VTRs alone was about 50 000 euros. When the desktop editing revolution came in the nineties and prices on hardware and software continued to drop into the next decade, building your own high end editing suite was suddenly possible for a whole lot more people.
Now most freelance television and film workers have access to an editing suite or at least a software only editor in their laptops. I have an Avid Media Composer in my office that I do most of my work on but sometimes I want to start the edit in the field or (more often) I want to take my work with me and continue working at home, on a train or plane or somewhere else.
Until I came up with the solution that I am about to share with you, doing this involved copying of project files, media and the risk of confusing versions and loosing edits.
By using the free cloud storage solution Dropbox most of these problems have disappeared and I also have a very safe backup of my project files.
Before I get into the details let me tell you a little bit about Dropbox. If you don’t already use Dropbox you should download it. If you use this referral link  – I will get me 500 MB more storage. Thanks! J
Dropbox creates a folder on your computer that is mirrored on Dropbox servers. Everything you put in the folder is still stored locally on your computer and available off line, but a copy is also stored on the Dropbox servers. Files are stored and transferred encrypted and unless you violate US antiterrorism laws (which would technically be a reason for the Dropbox people to open up your account to authorities) I’d consider them very safe on their servers.
This in itself is a great free service. You now have a backup of your files which you also can access anywhere using the Dropbox webinterface. Dropbox also saves old versions of your files and let you go back in file history if you accidently delete something. The greatest thing about Dropbox however is that you can install it on several computers and mobile devices. This will result in an identical folder on all of your devices and as soon as you put a file in any of the devices it will be mirrored on the others.
Now, how do I use this for “cloud editing”? What I have done is simply to put my Avid project folder in the Dropbox folder and helped Media Composer find it by pointing at it in the “open project window”. Everything works as normal since all I have done from Media Composers point of view is move the project folder to another location. But everytime your Sequence or Bins change the changes are uploaded and mirrored on all you other devices. This means that if you close down the project on you main computer and open it up on you laptop you will have an automatically updated project that looks just the way you left it on the other computer.
The only thing that remains is to make sure the other editor has access to the media being used in the project. This can be done in several ways. One way is to copy all you mediafiles belonging to the project to a small USB3-drive that you hook up to the other computer. You now have identical media on both machines and the changes you do in your edits are automatically mirrored. All you have to do is to shut down your editor when you leave the office and fire it up on you laptop and keep going where you left off.
Another great thing about this is that you have a backup of your media in a different location and a project backup on at least two computers and in the cloud with file history!
In a worst case scenario – let’s say your office catches fire the day before deadline while you’re editing – all you have to do is save yourself and the USB3-mediadrive unless it is not already in a safe place and continue your work.
I have only tried this with Avid Media Composer and am not familiar with how Premiere/Vegas/FCP stores it’s project files. I would imagine it would work in a similar way. Good luck trying it out and please leave comments on how it works out for you! Especially if you are using other editing software.
kl. 11:56
Skicka med e-postBlogThis!Dela på TwitterDela på FacebookDela på Pinterest